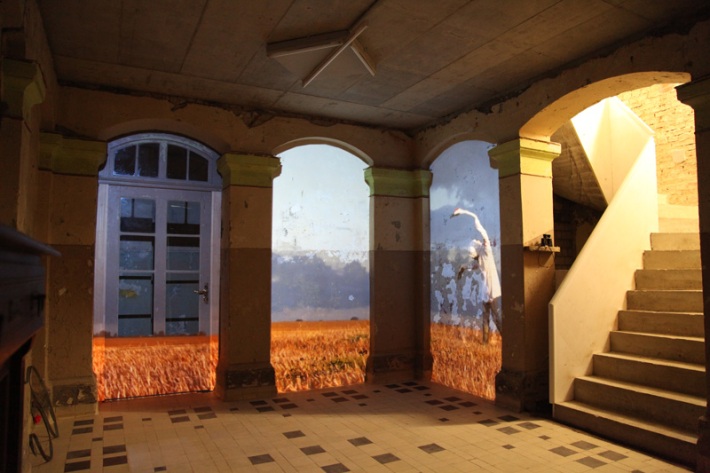 You Live and Do Me No Harm, Emma Waltraud Howes with Kai Meyer

Emma Waltraud Howes and her Kranich Museum works (‘You Live and Do Me No Harm’, ‘Hollow Bones’ and ‘Crane-rearing Costume’) are the subjects of this final interview in a series of three. It follows interviews with fellow Kranich Museum artists Andy Graydon and Tamara Friebel. Tom Heaven spoke to Emma a couple of weeks ago.

When I was first approached by Khadija and Alex and started my research, trying to figure out where I wanted to focus the project, I must admit I got slightly overwhelmed. Khadija and Alex had asked me to look at the line between movement and form, what it means to the visual arts, which is what my practice is all about. I started looking at the crane dance of these animals. They train their children through dances, through repetition, and the children copy back these actions, which is a very similar trait to human-animals when we’re teaching our young to eat, or to go to the bathroom, or to walk. We demonstrate these things for them and they play them back. This behaviour is one way of establishing empathy for other animals. I wanted to make a comparison with this somehow. What was nice with this research was that it gave me a wealth of information to go on, and that allowed for this incorporation of movement, but also it lead me to other opportunities to bring in material forms, and this came up when I started to look at rearing and costume rearing techniques (which is a whole other field of research that I could spend the next few years of my life studying), but where you actually have humans dressing up as cranes in order to bring up young cranes that don’t have parental figures around, because cranes are at the moment close to extinction. There are certain breeds of cranes that are close to extinction, and so this is what led to the current work that is in the crane museum at the moment, in the doorway. Khadija and Alex recommended that space for the work, which was perfect for me, as one other line of interest for me when making work is how to incorporate it into the context. That is why I went up to the museum and did most of the filming there on location. Being able to work in that space, working in the archways of the museum itself. It was quite a challenge, because I or Kai Meyer, who I was collaborating on the filming and editing of the work, had ever done any of this video-bending and fitting it to the arches, but also I found it a lucky challenge, because it pushed my work to a different level that I have never gone to before.

So you’ve spoken a bit about the material context. How aware were you of the surroundings, both architectural and the landscape and then also maybe the other artists who were displaying at the Kranich Museum?

My first visit to the museum was a couple of months before the exhibition and everything happened quite fast. I went to visit the museum twice and during that time I spent a lot of time not only exploring the museum, but the area around. I was lucky enough to see some cranes and also meet some of the people who live in the area, and so this was really important to me and helped me reflect upon the work when I came back to Berlin. I was doing a lot of tests and working out more of the conceptual side of the work here in Berlin, but then I was going up to the museum and running around in my gum boots and figuring out how I was going to perform this piece. Unfortunately I didn’t get much chance to meet any of the other artists, because we were always going up at different times. It was difficult to coordinate all of our schedules. I knew that part of the project, what was important to Alex and Khadija, but also to all of the artists involved, was that there had to be a relationship to the museum. The work was to be incorporated into the museum so that there was this real sense that it was a combination of visual art, the historical atmosphere, and how those lines can blur, so that sometimes you can’t be certain if its actually contemporary art piece or the museum itself, a blending of the space. That informed a lot of the installation, especially of the video work. This was important: one, to work with the archways, so that there’s this sense that we’re looking through the museum to another space, but also none of the walls were repainted, the floor and a lot of the details, the textures of that environment were left the same, and so it shows through as another layer, which also, for me, makes the video richer in a sense. I had my hesitations, because I thought you miss the cinematic frames, and they were stunning in themselves, they were another idea altogether, and then once I had put them into the space, cut into these frames, it took me a while to adjust my eye, to accept it for what it had become, but then I learnt to appreciate it. It became a part of the museum, and it really belongs there now for me, so I’m quite happy to see the images and I look forward to going to visit it. 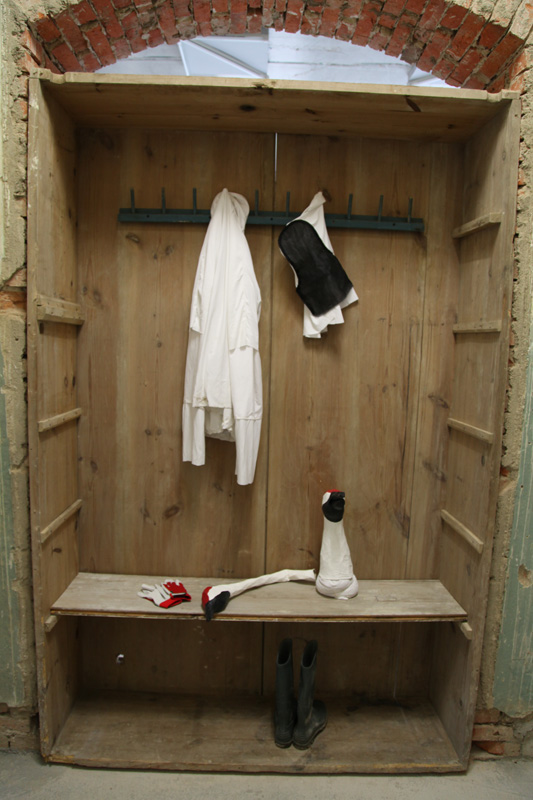 Where does it sit within your general practice?

I come from a background in dance. Because of an injury I actually left dance altogether and I studied visual arts at the Emily Carr Institute of Art and Design in Vancouver. Around that time I was studying Internal Chinese Martial Arts and this was how I got back the use of my ankle and started to incorporate movement, gesture, and dance back into my work. My practice became fully inter-disciplinary. So depending on the project, and what is specific to that project, I change the materials I’m working with. I work a lot with film and video performance, but also material-based works, so working with fibres, and sculptural elements. And then I did a Masters at Concordia University in Montreal, which is what brought me to Germany, as I did an exchange to the Bauhaus Institute in Weimar.

So what’s interesting about this project for me was that it has these three parts. The film part allowed me to work with materials, to build the crane heads which I wear on my hands, and then also the performative element, which was going to the Kranich Museum and running round the fields in this ridiculous costume. What was great was that all the horses were lined up at one point watching, and all the people in the neighbourhood were lined up along the road, all looking at me like I had completely lost my mind. It was fantastic, and so there was this performance element, and then the accompanying sound piece, which is upstairs in the museum, and then the remnants of this whole process, so the costume that is left behind. People can put it on if they want. I don’t think that anyone has yet. So it really for me was a project that allowed me to bring in all of those skills inside one project, which always for me is very exciting. It’s not always that people ask you to incorporate all of these things, but it is my goal to work with all of these elements, to find a way to integrate them into the practice, and find a way to make them inform and support one another.

What else are you doing at the moment?

An exhibition with Goldrausch Künstlerinnenprojekt IT, Fast and Furious: (http://www.goldrausch-kuenstlerinnen.de/2011/index.html). We are opening in two weeks at Halle am Wasser. It is a group exhibition of all the women who participated in this project. I’m showing a new work there, which also incorporates gesture and video with additional subtitles. The project is called An Archive of Accidental Gestures and is a four monitor video installation.

I just got back from Montreal where I was performing for the company kondition pluriel (http://www.konditionpluriel.org/). It’s a French company from Montreal under the artistic direction of Marie-Claude Poulin and Martin Kusch. The company is based in Berlin now. We were performing a project called Interieur, which is a two-hour long performance, made specifically for the new dome, at the SAT (http://www.sat.qc.ca/). It has 360° projections, something like 300 speakers (that could be an exaggeration), which makes the sound move in the space. I was working for them as a dancer and research assistant for the project.

After Goldrausch is complete, I will continue my work in Berlin. I’m currently working on a collaboration with Takako Hesagawa and the Architectural Association in London (http://www.aaschool.ac.uk/). We’re working on a symposium entitled On Dance and the Choreography of space: Dialogues between architecture and performing arts. It is a combination of dance and architecture, looking at movement, architecture, how the body is affected by architecture, and how people move in space. So this is my next track of research, preparing for that. I did a collaboration with Takako Hasegawa, three years ago and ended up going to see the space of the AA, and this place was one of these places… you need the golden key to get in. In the past I have done a series of site specific performance works, where I am outside on the street. I delineate a space to move within with chalk, based on my research into the original Bauhaus school and the work of Oskar Schlemmer. I dance in the space, but then not really dancing. I’m doing everyday gestures, but then collapsing into movement, and then going back to the everyday. Frequently I would get people coming up to me and asking if I needed help. They would say: “Are you sure you’re ok?”, so I couldn’t believe I was in this place. This crazy person off the street and they wanted me to present to all these architects. So I’m very much looking forward to that.